I was asked to guest lecture for a graduate level Extension Methods class and to cover in 40 minutes eXtension, use of social media in Extension, engaging traditional and non-traditional audience via technology. Other instructions were: “Have some fun with the group. Include anything (relevant) that you wish you knew at a young Extension agent/ what skills will tomorrow’s agent need to be successful.”
I was rushed and frankly did not prepare enough for an explanation of eXtension. This post is my attempt to explain eXtension and share openly some of the discussion. I am trying to become better at “working outloud” as Harold Jarche drove home the point in the panel discussion at National eXtension Conference.

Who has heard of and used Cooperative Extension? 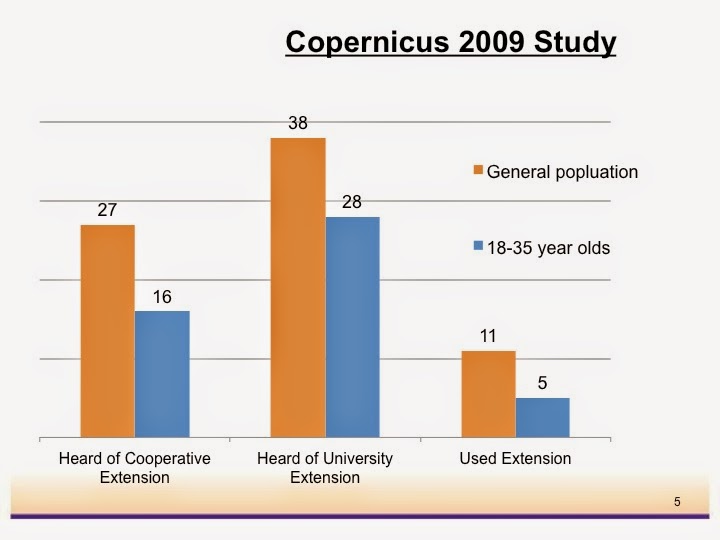 We can’t talk about changes in last few decades without talking about the significance of Tim Berners-Lee proposal in 1989 that created what we now know as the Web. Berners-Lee released the code for free for an “information management” system. We not only owe Berners-Lee for his foresight in technology but also his vision and continued voice in understanding the depth and breadth of the advantage of that the “free code” and campaigning for Net Neutrality.

John Hartley, a student in the class, referred to some opinions that mobile devices are killing the idea of hyperlinks because data are sitting in silos and not including hyperlinking—the foundational concept of the Web. The social online abilities are obvious changes as well.

Skills for Cooperative Extension Professionals.
We briefly talked about the six drivers of change that the Institute of the Future describes in their report on the work skills needed for future knowledge workers.  The drivers are: rise of smart machines and systems, globally connected world, superstructed organizations, new media ecology, computational world, and extreme longevity. In this report, IFTF describes 10 skills needed for the future.

We also talked about the Extension Committee on Organization & Policy (ECOP) sponsored a study on the skills needed for the 21st Century Extension professional. Skills from both of these studies are shown in this table. 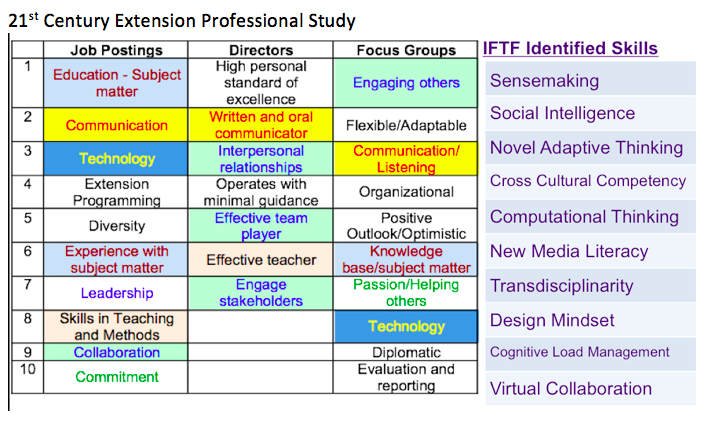 We cannot scale ourselves by with our current face-to-face relationships. Also there are many potential clientele who simply do not have a desire to drive to the county office or attend a physical meeting. Even some of our current clientele are asking for more flexibility in learning opportunities.
Cooperative Extension professionals are the epitome of knowledge workers. Extension, like many organizations, does not have the capacity to provide all training and knowledge to its professionals. Cooperative Extension professionals should have the desire and flexibility to learn informally from others through online networks. Using the relationships with others to filter and focus on pertinent information.
Cooperative Extension has tried to provide services and employment by seeking demographic diversity. We also need to be more cognitive of seeking out clientele and others who have different political ideals, social beliefs, disciplines, and culture. Diversity of thought provides opportunities for innovation and improvement our reach and impact of our programs.
The Cynefin framework describes how solutions for complex problems derive different results and cannot fit into neat model. Rather that complex problems should be address in a probe, sense, and respond.

A few of my own thoughts on the attributes are a successful future for ExtensionTransparency and openness in our work, decisions, and findings.
All Cooperative Extension materials were public domain before 1990. Creating and scaling our work cannot be done easily through all rights reserved products (Creative Commons licenses that allow for easy sharing and remixing).

eXtension
There is no federal or centralized system for Cooperative Extension. Cooperative Extension obviously has federal ties with USDA, ECOP and Association of Public Land-grant Universities.  eXtension provides opportunity to find synergies across state lines with a national online presence. eXtension is more than a web site—it’s a presence, it’s professional development, and it’s a mechanism to breakout of our geographic buckets.

eXtension is currently funded through New Technologies of Ag Extension (NTAE) and assessments from the Cooperative Extension institutions.

Content is built through collaborative efforts among Cooperative Extension faculty. Communities of Practice (CoPs) provide the mechanism to develop content (content is more than the text, content is also videos, webinars, social media, etc.). There are opportunities for
CoPs sometimes include others outside of Cooperative Extension. www.extension.org is the hub for eXtension.

Ask an Expert https://ask.extension.org/ is an opportunity for anyone to ask questions on through widgets. These widgets can be installed on any web site. AaE provides one-to-one engagement prospects that are analogous to telephone calls that come into county offices.  People ask questions through Ask an Expert widgets and Cooperative Extension/University staff and volunteers answer them. AaE widgets can be customized for area of interests—generally around the CoP topics or locale. Many county offices use the widgets and direct the questions to their own staff. Questions can be distributed throughout the Cooperative Extension system, in other words the system has the “local offices’ back”. A public option is available for the questions so the questions can be searched and commented on increasing the opportunities for discoverability and engagement.  Reports are available by state and individual. This feature is helpful for end of year reporting for Extension professionals.

Texas answered the most questions. Many questions come from metropolitan areas, like Houston (Harris County).

Learn https://learn.extension.org/ is a listing of synchronous online professional development and other learning opportunities. Events listed maybe hosted by eXtension, others in Cooperative Extension and other entities. Anyone can post events in Learn with Google, Twitter, Facebook or eXtension IDs.  Each page for each learn event can serve as holding place for everything related to the event. Those posting the events can include descriptions, time, dates, connection information, slidesets, additional reading material and recording links.

Create http://create.extension.org/  is the main place where the CoPs collaborate. Create is also used an internal work space. When articles are written collaboratively in Create, reviewed by peers, and copy edited they are then published to published to www.extension.org  where the content is indexed in search engines. Though anyone can see the content in Create, one must have an eXtension ID and belong to the community to edit anything in Create.

People https://people.extension.org/  is where one obtains an eXtension ID, creates a profile, list social networks and interests, and indicates profile settings for Ask an Expert, Create, Learn, and Data. People serves a springboard for any work that requires an eXtension ID. People is great way to find communities and colleagues .

In closing, I proposed these questions for the students to consider:

Starting to work out loud by Harold Jarche http://www.jarche.com/2012/12/starting-to-work-out-loud/

An analysis of the priority needs of Cooperative Extension at the county level by Harder, Lamm and Strong http://www.jae-online.org/attachments/article/56/Harder_etal_50_3_11-21.pdf

Pew Internet The web at 25  http://www.pewinternet.org/packages/the-web-at-25/

Learning and Working within a Learning Network
http://about.extension.org/2014/03/10/learning-and-working-within-a-learning-network/

So much here, Anne. It would be fun to deconstruct this and discuss items in a workshop someday.

I appreciate your focus on trust and building relationships and how trust in universities is not once what it may have been.

I think building trust and relationship building is just as needed internally within our national system. I see we often skip over this because we are seen as a system or one organization, but building trust with each other IMHO is foundational to reaching beyond.

I would argue there are many times we could be working together but different groups may seem like they have a rift between them just because they don't know each other better (because of job classification, different program area, or geography). On the positive side, I've seen these 'rifts' quite readily disappear when we just spend time connecting, conversing or making conversation. Because our new social networks let us interface with with both internal/external 'audiences' simultaneous, it's great to think that we could build trust and relationships simultaneously just by sharing or narrating or work )http://www.jarche.com/2012/01/narration-of-work/ just a few minutes (or a bit more) per day.

One small clarification, "There were 48,000 questions last year answered through AaE. 54% of the people asking questions had never heard of Cooperative Extension." That is actually never heard of _or_ never used. It was split almost equally between the two. So more accurately it would be 27% had never heard. (Working from memory so I could be off a few points, but I'm horseshoe close.)