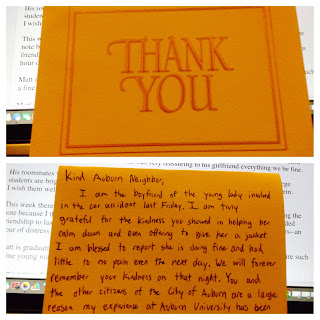 Friday night, almost a week ago, I was in the den watching football (just one game) and my husband was in the adjacent sunroom closer to the front (switching between football games). Heh it works--don't judge.

I heard a noise toward the street and John says "That's a wreck!" Over the last 3 decades, there have been several wrecks. We live on a main street that flows through our college town. Past the south drive way there is a connecting street that has had many wrecks; more when there was no light, fewer with a caution light, and fewer with a stop light.

Opening the front door, I could see lights shining toward the north driveway at an odd angle. This is a bit unusual; most wrecks happen on the south of the South driveway. Seeing no emergency vehicles on site, I decided walk down. The young lady sporting a a UAB sweatshirt was visibly shaken but seemingly physically okay. Her story to her mom on the phone was consistent to anyone who asked.  "I know this sounds crazy. I heard really loud pop and saw a flash of light, then I was hit and I spun around into this yard."  What she did not realized is that in the opposite direction, a SUV hit another car which was turning left from the other lane which then hit her car that sent her car spinning into our yard. It is unclear but Mary, the young lady avoided at least on car from the opposite direction and possibly another.

One person was driven away in an ambulance. Mary was very concerned about the other person though it seems there was nothing she could have done differently. The emergency folks assured her the person was conscious would probably be fine. We kept telling Mary that we understand it was upsetting. Occasionally we mentioned how lucky she was. Her car could have been hit closer to front driver's side or her car could have spun into light pole--just a few feet from where her car stop. We thought of these things more times than we mentioned them.

Mary was coming into town to visit her boyfriend who not only showed up but calmed Mary's parents on the phone. He was steady, reassuring, and pragmatic. He was considering the next steps. Making sure to get all paper work, cleaning the car of necessary items, and taking pictures of the car. He asked pertinent questions: "Where will her car be towed?" "How do we get information for insurance?" Most importantly, he was very comforting to his girlfriend holding her and telling her everything would be fine.

His roommates were on the scene too. They were trying be helpful. I am sure both Mary and Matt. felt they were supported by their friends. These college students are bright, respectful, and kind. They seem to care about the right things. I was impressed with all of them. I wish them all well.

Walking up to my front door one night this week, I found a wonderful note and plant sitting in front of the door. I am sharing the note because I think he, his friends and his girlfriend are special people and have found a bonded friendship to last a long time, possibly because they are loyal to each other and caring to others--an hour of distress shows true selves. Also, I believe there is much goodness in the young adults today that gets overlooked. Shining examples of goodness are this young man, his girlfriend and his friends--all engaging and caring young people who make me think the future is bright.

Matt is graduating in May in Electrical Engineering. Any company should be very lucky to hire such a fine young man. 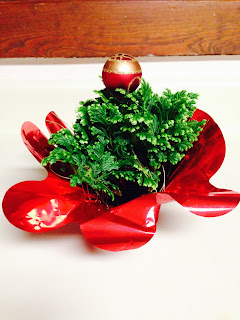 
I am the boyfriend of the young lady and involved in the car accident last Friday. I am truly grateful for the kindness you showed in helping her calm down and even offering to give her a jacket. I am blessed to report she is doing fine and had little to no pain even the next day. We will forever remember your kindness on that night. You and other citizens of the city of Auburn are a large reason in my experience at Auburn University has been so positive. May you and your family have a wonderful holiday season.

I really appreciate the time he spent recognizing us. I am sure our neighbors across the street who stopped traffic when emergency folks were not there were given similar notes.

In this expanding city, we are still a community--the university and city are often connected in unforeseen ways--this is one reason the city of Auburn continues to be a great place to live. This young man recognized a value that can't be counted and is often very hard to describe.


"....citizens of the city of Auburn are a large reason in my experience at Auburn University has been so positive."

I hope Matt and Mary the best in their futures--they certainly have the emotional foundation to do so.